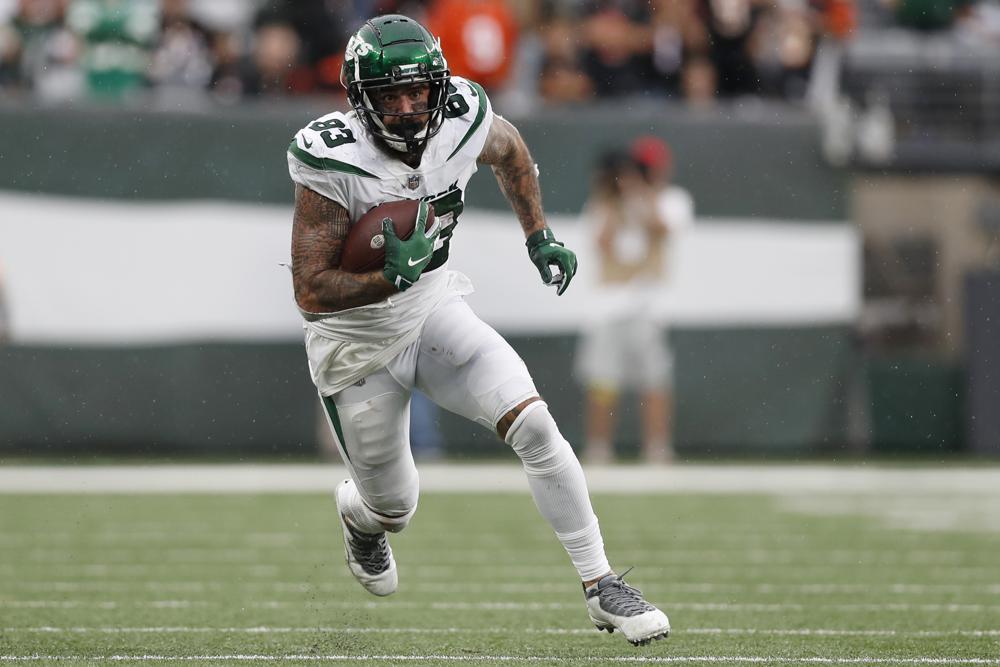 Tyler Conklin had childhood dreams of the NBA hardwood, shooting jumpers and dunking at arenas around the country.

His journey took a few twists and dribbles — and he ended up catching passes in NFL stadiums instead.

“I mean, I really believe everything happens for a reason,” the New York Jets tight end said Friday.

Conklin, in his first season with New York after four with the Minnesota Vikings, has 18 catches — the most by a Jets tight end through three games since the NFL merger in 1970.

But not totally unexpected.

When Conklin signed a three-year, $21 million contract in March, he was brought in with fellow free agent signing C.J. Uzomah to give New York a solid pass-catching tight end duo. While that hasn’t come to fruition yet — Uzomah has one catch in two games — Conklin has shown signs of being productive in Mike LaFleur’s offense.

“It’s nice to get catches, but a lot of that stuff is just getting to our checkdowns, late in games when we’re behind and running 2-minute and that sort of thing,” Conklin said. “I think the catches will feel a lot better when we start winning and stacking these wins.

“But it’s definitely a cool stat. And hopefully the ball keeps rolling that way.”

With Zach Wilson set to make his season debut Sunday at Pittsburgh, he and Conklin could re-establish the chemistry they had in training camp before the quarterback injured his knee in the preseason opener.

“What’s cool about him, he’s a team guy,” LaFleur said of Conklin. “He’s going to do whatever’s asked of him and you just know he’s going to come through.”

That’s despite the two fumbles Conklin has — one in each of the first two games, both recovered by the Jets.

“It bugs him more than anyone else, trust me,” LaFleur said. “Because that’s not the player he wants to put out there.”

Not when Conklin’s path — much of it memorialized on his body by what he estimates is 150 hours of tattoo work — has been filled with doubters.

And constantly proving them wrong.

“I just realized how much for me,” he said, “every opportunity, every rep matters.”

Conklin was a standout guard in basketball and wide receiver in football at L’Anse Creuse High School-North in Macomb Township, Michigan. The basketball squad was outstanding, but the football team was lousy — “We were like 0-27 going into my senior year” — so he had more fun on the court.

The school hired a new football coach in Conklin’s senior year and things quickly turned around. The Crusaders went 8-3 and won a playoff game — and Conklin enjoyed football again. But he was lightly recruited for the sport and ended up at Division II Northwood University to play basketball.

“I was the first person in our family to have a scholarship,” he said. “A full ride.”

He played in seven games through one semester. But Conklin left in the middle of his freshman year.

“I felt like I was selling myself short a little bit,” he said. “Like I should’ve been playing at a little higher level.”

He got some interest from some mid-major schools for basketball. But his focus changed while watching a Michigan State game at a restaurant and saw tight end Josiah Price catching passes.

So he called Michigan State and Central Michigan about joining their football teams. Central Michigan allowed Conklin to walk on as a wide receiver in spring ball. But they suddenly moved him to defensive end in the final week.

While working a construction job that summer, Conklin decided he’d transfer to a smaller school where he could play both football and basketball. But first, he asked his Central Michigan coaches if they’d be open to giving him a shot at playing tight end.

They agreed, and Conklin developed into one of the country’s top players at the position over the next few years.

“And then senior year, I’m talking to agents and I’m like, OK, it looks like I’m going to get drafted and be a late-round pick,” he said. “First day of camp, senior year, I break my foot. I’m devastated.”

Conklin worked his way back and missed just five games — and impressed NFL teams enough. He was drafted in the fifth round by Minnesota in 2018, and gradually worked his way up the Vikings’ depth chart over the next few years.

Conklin had a breakout season last year, getting increased opportunities because of injuries at the tight end spot. He set career highs with 61 catches, 593 yards receiving and three touchdowns.

That turned into a big payday with the Jets — and another chance to show he was right about himself.

“Since my rookie year, I knew I could be a starter in this league,” Conklin said. “It was just a matter of people putting labels on you and narratives that are created, and you’ve just got to ignore it all.

“And when you get the opportunity, you’ve got to prove that what you believe is real.”